Food available with $5 in Japan

One day my supervisor asked me what I would be able to buy with a dollar in Japan.
(Approximately 80 yen is equal to a dollar currently.)
A McDonald's normal burger would be the clearest answer, but nothing came to my mind except it.

Therefore, I searched on the Internet to figure out good examples for the question.
And I have found a good article which features Japanese set meals available less than five dollars.
I cite some pictures form the article.

The appetizing meals' pictures are put in the "Read more". Please check it out!
(By the way, we call traditional Japanese set meal "Tei sho cu". McDonald in Japane uses "set" instead of "meal".)

Q. What is your feeling towards the new law?
> Settle the claim with pirated editions first before approving legislation.
> The law to arrest on a separate charge, after all.
> It's a pity illegal downloading is no longer available, but the law is reasonable, considering today's situation
> The situation will not change. People don't care about it.
> Public opinions are ignored by governors evading taxes.
> I'm afraid of using the Internet.

Q. Will the new law bring economic recovery?
> Download files in order to preview works. If they are good quality I pay for them.
> It has happened because of recession.
> I am poor!
> Prices are extremely expensive. 1,000 yen ($12) is enough for an album.
> Think why people don't pay.

Q. Will the market recover?
> If the prices get cheap the markets would change.
> The law is made by part of people who will gain money. it doesn't relate to the economy at all.
> Downloads played a role of advertisement.
> It's just nonessential groceries. People likely lose interest and quit to use them.

The Act of Anti-Illigal Downlode

The new law against illegal download was enforced in Japan on October 1st. According to the news website CNN ,

Those who possess illegally downloaded of music or films in Japan can face prison term of up to two years and fines of nearly 2 million yen (U.S. $25,679), ...

Check the summarized information from the following link.
(The link for CNN is available from "read more".)

Needless to say there are tons of files uploaded illegally on the web, and you will find anything by using search engines like Google. For example, if someone puts "a music title + mp3" in the search form, he would find the music file and be able to listen to it at no cost. Using illegal tools are apparently bad and should be punished. the law would be influence widely soon.

However this new law has been accused of several points by many Internet users and organizations. The major opinion seen on the web is the ambiguity of the law. (The translations of the opinions are available on the next day's journals.)

I think it should have been enforced after taking the action against people uploading illegal files. Once the root of all evil disappear, nobody relates to it, isn't it? 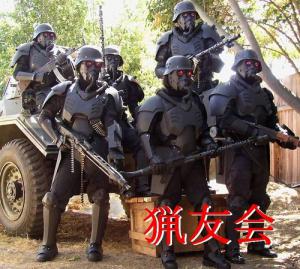 Too massive to hunt animals.lol

Japanese humor is different from American jokes.
It's rather easy to tell the sense of humor by using pictures as they are visible, but literal jokes are very difficult to understand the sense.

When I don't have time I am gonna put funny pictures instead of writing articles...


Below is written in Japanese.
以下日本語ですー。

Currently many newspapers feature territorial disputes. I often see this type of word on any papers or websites such as BBC, CNN, Japan Times, and so on.

Unfortunately our country has also been involved in this issue with a few countries, and the situations are growing more serious in these days. They have often recurred over decades but usually faded away soon. However this time the conflicts seem to be exceptional compared with past examples, and people are even writing on BBS that war might break out.

As all Japanese know, Japan would never authorize military force because of the 9th article of Japanese constitution, which is the nation's one of the first three principles and represents its pacifism. Educated it since elementary school students, people basically tend to be opposed to war.

There is an anxiety in my mind. The modern forces are very mighty so that I can barely imagine what will be brought after war.
If it happens while I'm in Canada, what am I going to do?

Below is written in Japanese.
以下日本語です(-_-;)

Author:Hika.Furu
is...
aspiring to master English.
going to write anything I want.

Want to be friends with this user.